Our last two nights on the West Highland Way we spend camping in the wild. Not that it was really wilderness or anything – we even had a pint of beer in a pub which was not even 100 m from our tent. The only problem we had while cooking and setting up the tent were the many midges flying around us. We were tempted to buy midge repellent for the last night, but decided against it. We just had to be quick on everything. 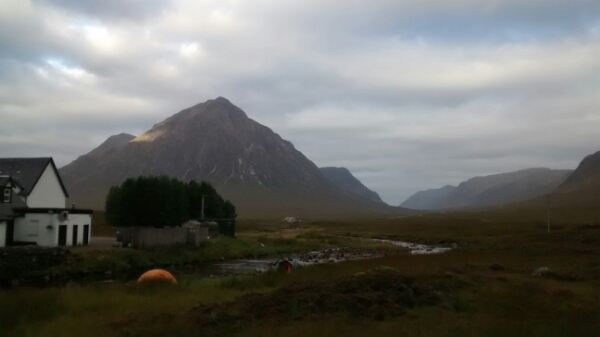 From Kingshouse to Kinlochleven, the second last part, it was only 14 km, so we arrived quite early. Since the last stretch would be the longest and since we didn’t know about camping possibilities along the way, we pitched our tent right past Kinlochleven. And because there was nothing much to do we went to bed at 8 p.m. That way we were still able to get up at 5.30 a.m.the next morning. 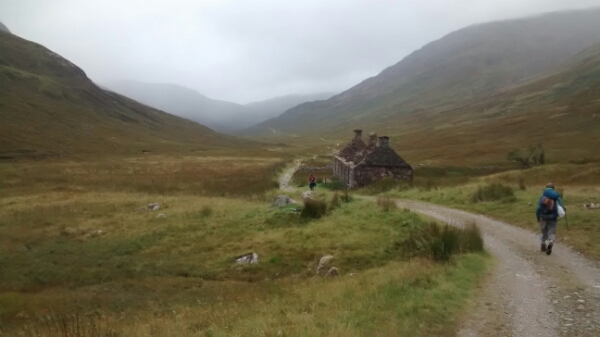 Getting up early was really important for the last part, which was 24 km (and 750 m up and down) to get to Fort William. As we walked into town we met the Germans again, who had visited the brewery with us on the first day. However, after a short while we realized that we were not yet done with walking for today – our next hostel was about an hours walk away, in one the suburbs of Fort William… The possibilities of taking a train or a bus didn’t occur to us as we thought it would be closer. 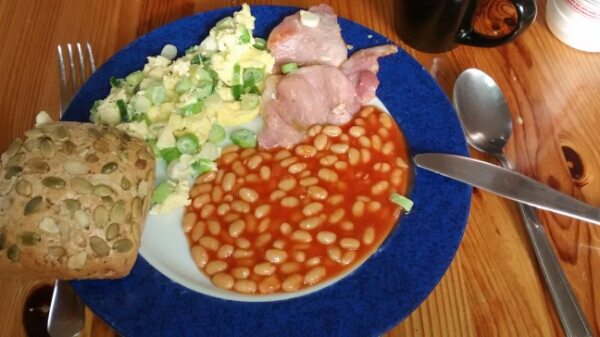 Wednesday was our day to relax. It started really great with a real English breakfast. Then we took the train to Mallaig, a small town on the coast. Unfortunately the weather wasn’t as nice as predicted and we couldn’t find the beautiful sandy beach that was promised. We did enjoy some fresh fish and chips though! 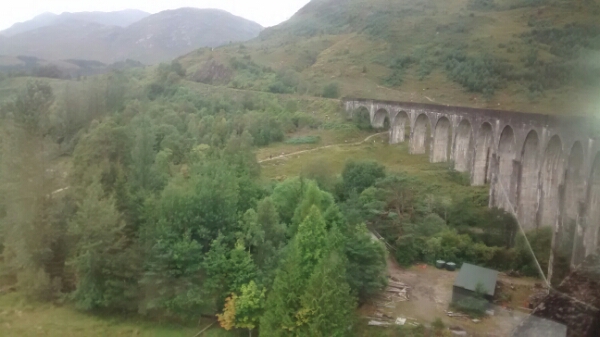 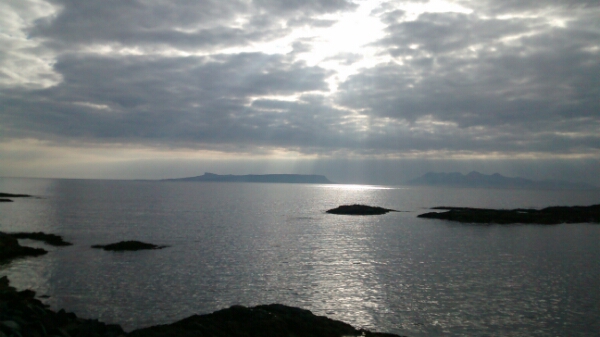 We spend as much time as possible at the Drovers Inn to keep out of the rain. Late in the afternoon we had to leave in order to reach our destination for today. On the way we picked up an old newspaper to dry our shoes in the night. Benno was captivated although the news were from last Monday. Somehow we’re not connected to the real world anymore. 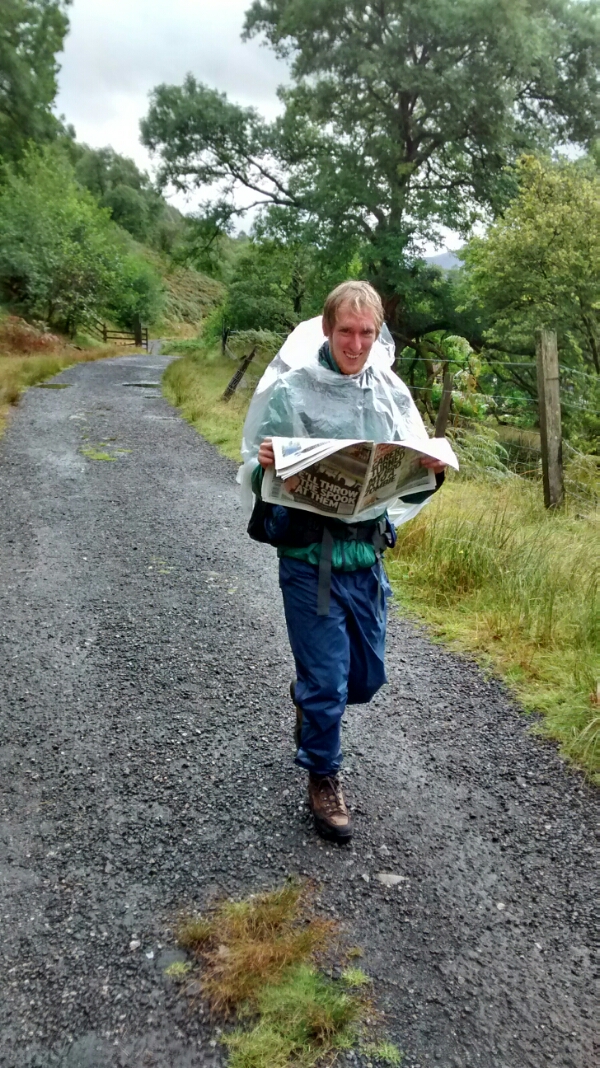 Our next campsite was located in a dark forest. It was protected against any storm and light rain. Additionally, the forest floor was nice and soft with all the needles. 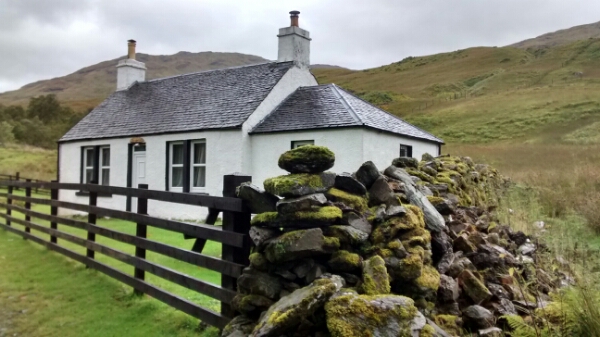 Saturday was better weather with only few light showers during the day. We continued our journey with the next stop at Bridge of Orchy. We had booked a bunk bed in a B’n’b, which turned out to be the old railway station building. The two platforms are still in use, but only very few trains pass by every day. One of them is the famous Royal Scotsman! 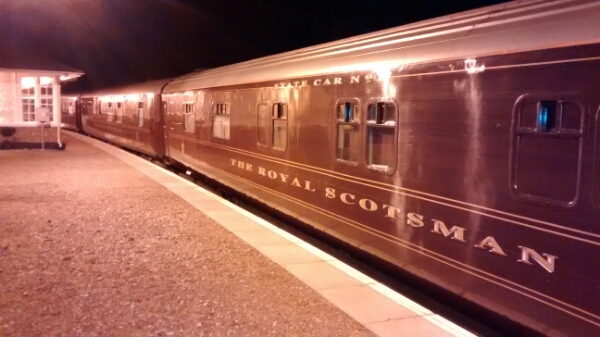 We left without breakfast since we weren’t allowed to use our camping cooker on the platforms. We didn’t follow the advice of the B’n’b owner (“the track over the mountains is muddy and in disrepair – use the road that goes around the mountain”) and continued on the normal track. It was definitely not close to being as bad as he had predicted, but on the other hand he didn’t look like he was doing a lot of hiking himself. It turned out to be one of the nicest parts of the West Highland Way. 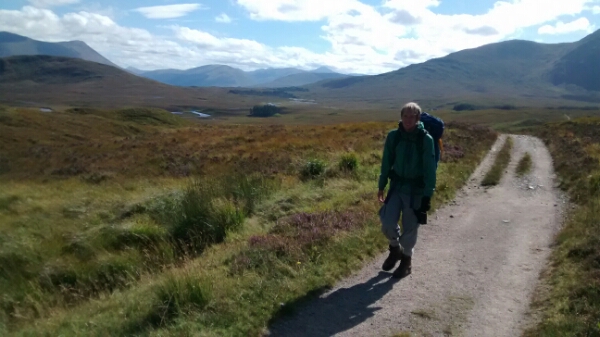