I arrived in Seattle on the 4th of July. Thanks to Jacob, I had already found a place to stay before entering the country. Christina, my host for the next two nights, was super nice and I really enjoyed my time. She gave me some good tips on where everyone goes to watch the fireworks (Gas Works Park), recommended a great Indian restaurant and other stuff. When I left off to explore the city it was early afternoon and I had more than enough time until the fireworks started. On my way downtown I checked out a park with some nice trick fountains and watering holes where everyone was taking a break from the hot weather. 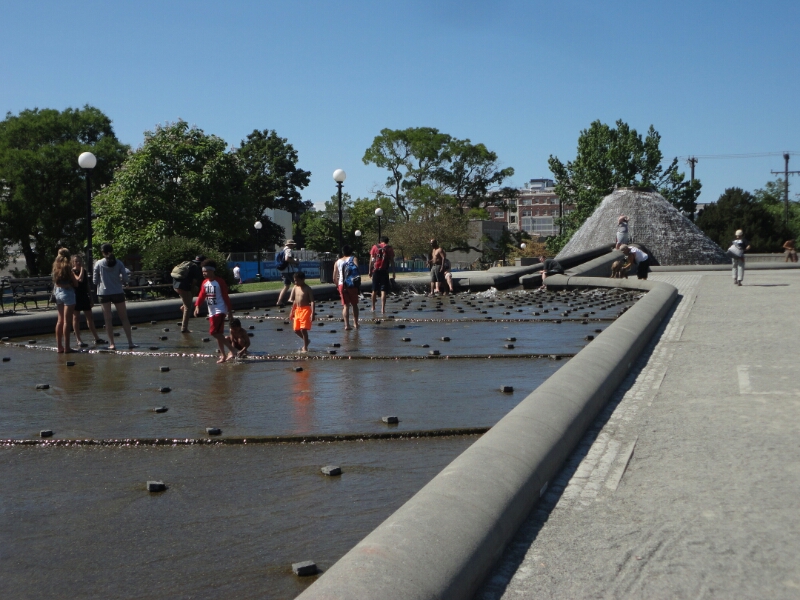 I continued and ended up at Pike’s Place Market, an old building with multiple storeys and lots of little shops inside. Most of them were selling gifts, used books or gadgets and home decoration. On the top floor there was also a real market, but the shops were closing up for the day.

Right across from there is the waterfront with a ferries wheel, the aquarium and many different piers where you can hang out and relax. And that’s exactly what I did, because the jetlag was coming through. After some fish ‘n’ chips (great math: $20 + 1ct  = food plus $4.39 and 1ct change) I followed the waterfront to the Myrtle Edwards Park, close by the Space Needle.

Meanwhile it had turned 8 pm, so I still had two hours before the fireworks started, but I decided to head for the Gas Works Park. However, those two hours were not enough, because neither locals nor bus drivers were able to tell me how to get there. I ended up back at the western waterfront, thinking to myself that the view of the city is also nice and I should have a good view with fireworks all over the city. Unfortunately that was not the case and the skyscrapers blocked almost everything. The only fireworks I did get to see were the ones from Manchester and Bainbridge Island, which were more than 5 km across the bay.

The next day I walked all over town again to have a look at the Arboretum, the University of Washington and the famous Gas Works Park. It was indeed not easy to get there, but I had downloaded a bus map and an offline map.

On Monday was my last day in Seattle. I took my luggage to the train station and checked out the Pioneer District close by. There they have cool underground tours showing the former ground floors of the surrounding buildings. After the great fire in the late 19th century it was decided to make new roads with a sewage system underneath. Instead of digging in the ground (high groundwater) they build walls and filled the space in-between with debris from the old houses. The walls were more than 2 meters high, so the ground floor ended up being the first floor.