Back in Windhoek, Teemu had already found Arttu (Finland) and Carlos (Bolivia), who also wanted to go to Sossusvlei to see the red dunes for which Namibia is famous for. We managed to book the car two days in advance, but it seems like we were quite lucky, because a day later there were no more cars available in all of Windhoek. Getting to Sossusvlei involves mostly gravel roads, which is why we decided to take an SUV instead of a normal car.

At the pick up of the car we were lucky again and got upgraded to a Toyota HiLux with four wheel drive (4WD). This solved any problem we would have had with our luggage, but also enabled us to take Brendan (Canada) along, who had almost given up on getting to Sossusvlei due to the lack of rental cars. The only downside to the upgrade is the fact, that the back of the car was not air tight, leaving little holes where the dust could enter, covering everything with little layers of dust. 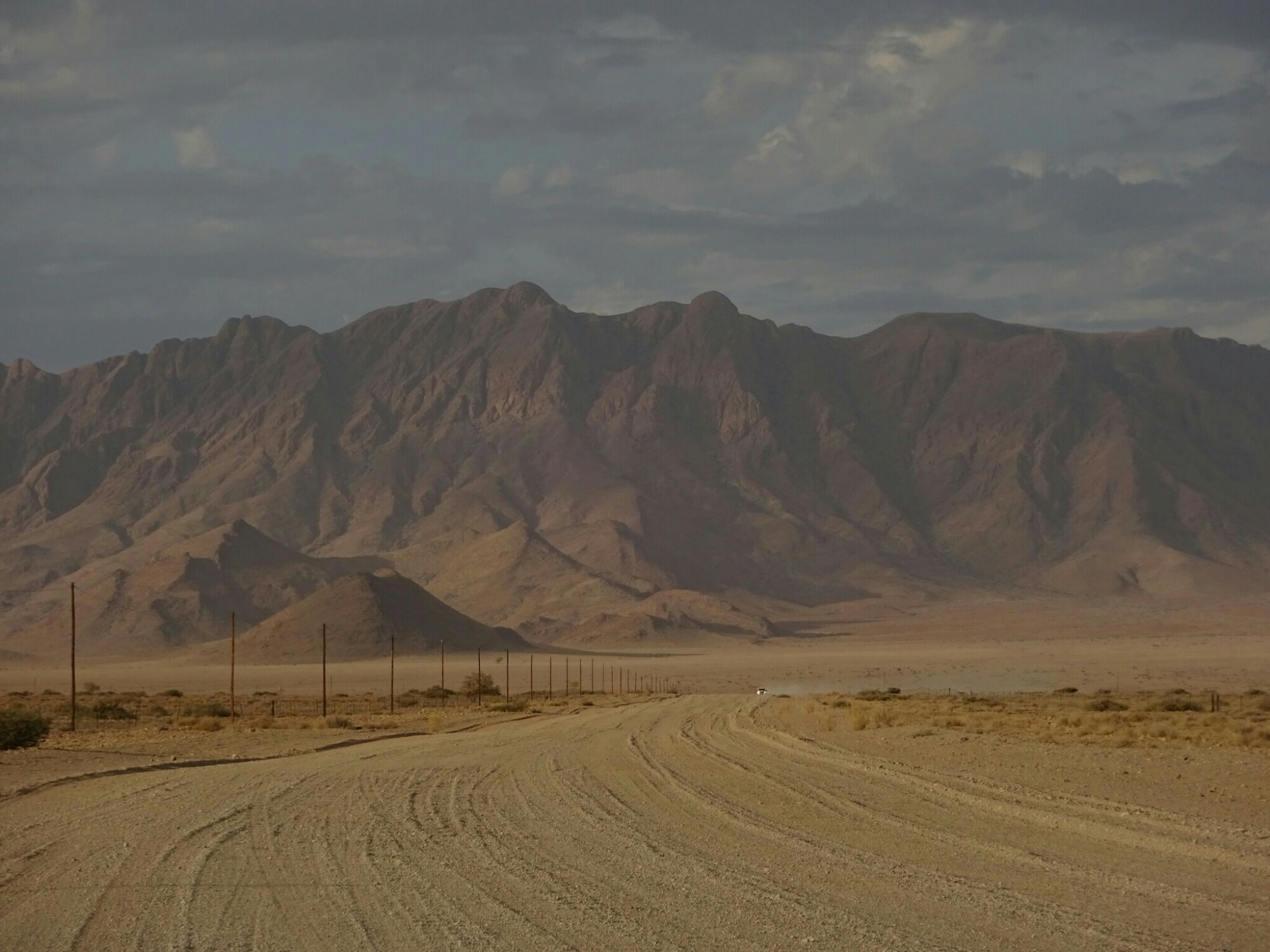 However, the better car did not prevent us from getting a flat tire about 100 km from the park entrance. So we got out the necessary tools and the spare tire to get us moving again. We managed quite well, but from now on we were driving even more carefully. It felt a little bit like losing the last life on Mario Bros., because one more flat tire would have screwed us up completely. But everything worked out and we managed to reach the park just before the gates closed for the day.

When visiting Sossusvlei it is important to stay on the campground within the park limits, because the gates are closed during the night, making it impossible to get deeper into the dunes on time for sunrise, when the light on the dunes is best. Equally impressive is the sunset, which is also impossible to watch if you have to leave before the gates close.

For sunrise many people are going to “Dune 45”, which is located 45 km from the park entrance (where the campground is located). To be on time we had to get up at 4:45 am, leaving us enough time to get there. Fortunately the main road through the park is paved, allowing us to go at higher speeds than on the gravel roads. Nicer and more quiet is “Dune 40”, where I went the next morning.

After a magic sunrise we drove deeper into the park. Here is where our 4WD came in handy, because the last few kilometers are sandy road, where normal cars are not allowed. Driving slow and steady, we managed to get to the end, saving us another 10 Euros per person. From here we climbed the highest dune of Namibia – “Big Daddy” – for an amazing 360° panorama of the red desert.

As hard as it was to get on top of the dune, getting down was so easy and quick, because you can run/slide straight down to “Deadvlei” (=dead valley), which was cut off from the (infrequent) water supply of the neighboring Sossusvlei. As a result most of the trees in the valley died. Due to the dry climate, the wood is not decaying, leaving only the trunks standing.

During midday we went back to the campground, because it’s too hot to do anything. As it cooled off in the afternoon, we got a new tire at the gas station, giving us more safety for the drive back to Windhoek (or a “1-up” to stick with Mario’s terms). But before going back there were still a few things worth seeing – Sessriem Canyon, sunset at “Elim Dune” and the best apple pie in Namibia, which can be found at “Moose’s Bakery” in Solitaire.